Today was an amazing day. It started cloudy, as most did before it, but it was soon apparent that the sun would dominate the sky. I explored the city of Finisterre, literally, the end of the earth. The place is beautiful, small and Spanish, from the architecture, to the fishermen. The twisted alleys somehow all led me to the sea and it was impossible, no matter how much I tried, to actually get lost here.

One of the reasons for which this place is famous is the lighthouse located a few kilometres outside the town proper. It has, in time, become a secondary ending point of the Camino, as pilgrims, basically the early incarnations of tourists, wanted to see the place where land gave way to ocean, which stretched as far as the eye could see. Thus the end of the world idea. The memorable thing about the place was not the lighthouse itself, but the rocks beyond it, where pilgrims had left small sacrifices from their journey across the Camino. Whether a pair of socks tied to a rock, a pair of underwear, one of boots, a small silver angel hidden in a nook in the stones, or just soot from the fire of pilgrims who decided to burn some possessions, objects with a certain meaning for people, things they had carried throughout their journey, lay strewn all over the place, turning it into an altar of sorts.

After visiting the lighthouse and leaving something of my own behind, my friend and I enquired about a beach, unwilling to let such a sunny day go past without going for a swim in the Atlantic. After getting lost in a forest and backtracking from a nearly impassable path, carved by some unknown animal, the beach was reached at last. I threw myself completely into the ocean and quickly threw myself back out for the water is unbearably cold.

Later, at 22.16, to be precise, I went back to the beach and saw the sunset. Obscured by a random cloud in the last minutes of the day, the sun still put on a wonderful show and once again reminded me, trapped between the mountains and the sea, with both the sun and the moon in the sky and surrounded by a handful of other pilgrims, how small individual people are when facing the forces of nature. As I lay now in bed, I realise that the cold ocean and the wind hid the real strength of the sun from me. I am all red and shivering after spending so much time in the sun. But it was worth it. Today was the best day so far. 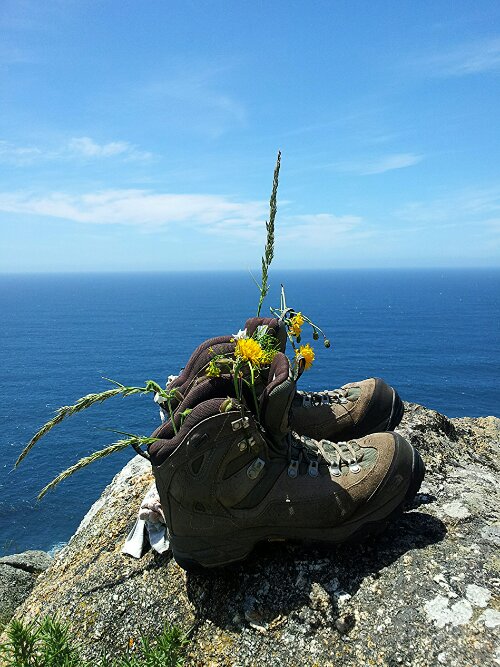 Offerings at the end of the world