Today was a day with a bit of everything. I switched from a raincoat to a t-shirt and back to the raincoat. The area traveled was probably the most mountainous so far and it offered beautiful sights, revealed by the rising fog. Said fog turned into a very low ceiling of clouds, threatening to pour some of their substance at a moment’s notice, further torturing the bodies of two lonely pilgrims. Although still wet and slightly miserable, I dealt with the challenges of the environment much better with the aid of music. It’s amazing how music can change my perspective so strongly. How some songs speed me up and others bring into focus little bits of nature I’ve until then ignored. Also, navigating a flooded area of a road is a lot more fun when you have a soundtrack to do it on.

Today was also the day I walked the longest. 35 kilometres. At one point I knew that if I stopped for only a few seconds I would not be able to start walking again. Moving my feet became a conscious effort as each step had to be persuaded out of my body. I later found out that I had developed a few massive blisters, one of which could easily pass as the sixth finger of my right leg. However, when I reached the ocean, I felt a sense of achievement stronger than the one I felt when I finished my last university exam, just weeks ago. I felt like I saw it for the first time, although I’ve been living next to it for three of the past four years, and I felt a strong urge to go sailing.

My friend and I stopped for lunch in the first coastal town that crossed our path. The plan was just to rest our feet for a short while before pushing for our destination. It was the kind of small cute place where they don’t even have a menu, and the waiter tells you what kind of food they have today. We decided that some hot soup would do nicely, as the weather was still bad. Acknowledging that we have ordered soup, our waiter proceeded to utter words which I recognised as rabbit, chicken and cod. I replied rabbit and minutes later we were served a slightly disappointing rabbit-less noodle soup. The surprise came when, after finishing the soup, as we were getting ready to leave, she brought a massive tray with two or three sacrificed rabbits on it and enough French fries to feed a family of four. Apparently, in my unfortunate, or perhaps fortunate, for the rabbit was excellent, grasp of Spanish, I had ordered soup and rabbit. And, since I was already there, I finished it all with a delicious local cheesecake. It’s the small things which can turn a bad day into a good one. 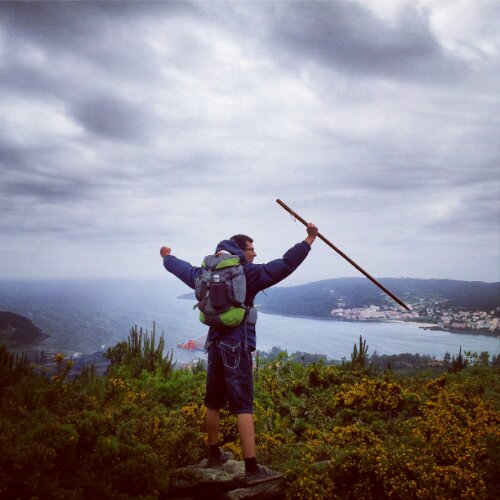