I write now from the secondary entrance of the Hotel Parador of Santiago de Compostela. The building which now houses the hotel was first opened, more than 500 years ago, as a hospital mainly for the pilgrims coming to the city. Upon showing their compostelas, the certificates attesting that they have completed the pilgrimage, pilgrims received free treatment and accommodation for up to three days. When the building was bought by the hotel chain and it became the luxury hotel that it is today, an agreement was reached stipulating that the hotel, in order to honor tradition, would continue to offer free meals to pilgrims, breakfast, lunch and dinner to the first 10 pilgrims that show up. Nowadays it is rarely used by those really in need, but it has become a tourist attraction. I am now queuing here with my friend, two Americans, two French speaking Canadians and a couple of people whose nationalities I cannot yet determine. A Swedish guy just arrived. With pilgrims coming here every day, this has become a pilgrimage location as much as the cathedral itself. The main reason I am here is because I really want to see the building from the inside. I like getting into places where I should not be.

Today I explored Santiago and rested a bit before moving on to the next part of my journey. With narrow streets and public gardens, with both flowers and vegetables, strewn across the place, it has its moments of beauty. However, I somehow felt better on the road, from small town to even smaller town. I felt more welcomed there. As my friend rightly said, there we were travelers. Here, we’re tourists. And with so many tourists around, the place has become very commercial, everywhere someone wanting to sell something to you. On the road I was just welcomed and offered a place to rest. I was amazed to find out that this city, the capital of the autonomous province of Galicia was founded because of the numerous pilgrims streaming here. How can a city survive without a sustainable economic advantage, I wondered. Apparently, the income brought by pilgrims transformed the place, as times changed, into a city heavily reliant on tourism. Even the ceremony I witnessed yesterday, in the cathedral, apparently only happens on special days, when certain saints are celebrated, or when certain visitors make generous donations. I checked. No major saint was celebrated yesterday.

Back in the magical albergue Aquario, where I’m spending the night in a much better environment than last night, my cynicism has all but evaporated. After being picked up by a doorman of the Parador hotel and led to a kitchen, I received my food on a tray and proceeded to a small dining room at the back of the building. The food consisted of a strange soup, with some sort of leaves in it and a decent tortilla. There were also two bottles of wine for the ten people there. What really turned my attitude around however was the company. Eventually the group consisted of two American women, two French speaking Canadians, a man and a woman, two Austrian women living in South Tyrol, in Italy, a Swedish guy, a woman from Holland and me and my friend. If you took me and him out, the age average in the room was about 65. During the dinner, I brought up the big question nagging me. Taking a delicate approach, I asked the people there why were they doing the Camino. One of the American women, a balet teacher from Houston, said that she will be 60 in a few months and wanted to accomplish this before she is officially old. Other stories were about challenging oneself, finding inner peace or getting in touch with the spiritual self. The one that impressed me though, was the Dutch woman. She said that now (she seemed quite old) she is all alone and she firstly wanted to prove to herself that she can still manage it. Secondly however, she knew that she would need help along the way. So she was here in order to learn how to accept that help. As she got older, she would need more and more assistance and, in a society where everything has a price she wanted to remind herself that there are still good people out there. She told me that she has accomplished her goals. She met more kindness than she could have imagined and she learned how to accept a kind gesture without feeling guilty and needing to offer something in return. Looking at myself, this is a lesson that I did not even know I do not know and have to learn. It made me feel humble but also good about myself. The journey is not over as long as there are things to be learned. And my journey, judging from how little I know so far, is only just beginning. 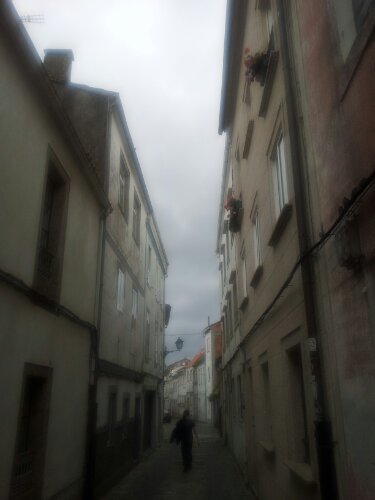 Eventually my turn came to tell the reasons for doing El Camino. I said that I wanted to see Spain more than as a tourist, but as part of something bigger than myself. I said that I will soon be starting a job in a tough and competitive corporate environment and that I want to stay who I am and not let it change me. And last but not least, I’m hoping that the journey will help me forget someone. Have I accomplished it, I was asked. Well, there’s still a lot of Spain for me to see.