Today I reached Santiago. The sun was hidden behind a thick blanket of clouds and the occasional drops of rain mixed with the tears of pilgrims seeing the sign welcoming them to Santiago. I timed my arrival in order to be here for the mass, or liturgy, ceremony, which began as I entered the, truly impressive, Cathedral of Santiago de Compostela.

The ceremony itself was interesting for more than once reason. Firstly, although not a religious person, I never saw a church so full of people, perhaps only during the Easter orthodox ceremonies. Secondly, it was conducted by six priests, three Spanish and three guests, one Italian and two English. Secondly, the nationalities of yesterday’s pilgrims were mentioned, probably in an attempt to draw attention to how diverse a crowd the pilgrimage attracts. Announcements however, were made in Spanish, Italian and German. Strangely no English. Third, and probably most important, when the priests and their helpers finished swinging a massive urn with aromatic smoke coming from it, I believe the exact term is censer, across the church, a roar of applause and occasional whistling took over most of the crowd. This tells me that most of the people in the audience, many tourists, but quite a few pilgrims as well, have attended a religious ceremony on even fewer occasions than I have. And this raises the same question again. If not religion, than what drives these people forward in their pilgrimage?

Moving on from the serious and pondering thoughts of this post, I’m now sitting in an albergue, on a paper sheet, drinking something very similar to Bailey’s. You see, my pilgrimage amigo and I have developed a kind of tradition. Every evening, one of us “is a good friend” and buys some alcohol. While I mainly stick to a bottle of white wine, he likes to experiment. As such, tonight, the poison of choice tastes something life vodka mixed with chocolate milk. He also bought some soup which he had to throw away. We still don’t know what it was but it definitely wasn’t soup. And right now he’s pondering upon his little finger, from the right foot, which he fears might have to be amputated. Overreacting, of course. He’s days away from that. We decided not to take the compostela, the certificate attesting that one has completed the pilgrimage, today. It was raining and we were tired. Tomorrow will be a better day to officially become pilgrims and to plan the second stage of our journey. 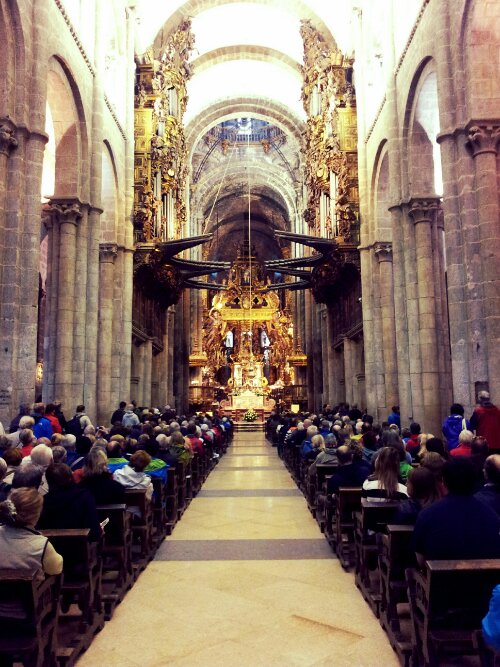