Today was the last day of planned exploration. I have visited all the museums, buildings, and other random points of interest on my itinerary. Besides the Lonely Planet guide I read in my time here, I found postcards to be a great source of inspiration. Simply stroll to a souvenir shop, virtually at every corner in the gothic neighborhood, and check out what looks impressive. Proceed to look on the postcard’s back for a description and voila, another item on the list of things to see. While there also buy a postcard and send it. You’ll have brought a smile to someone and it’s an act of minimal effort.

As I sit now, in my room, with my anti-mosquito app turned on, and ponder upon the last few days, many memorable moments come to mind.

First of all, apparently what two weeks of continuous walking through rough terrain in El Camino de Santiago could not accomplish, a small rock in Park Guell in Barcelona finally did. My shoes gave up with a sigh. I hopped to the nearest shop and replaced them. They’re still with me though, in a box. I was never really good at saying goodbye.

Barcelona is full of religious art. Thus, second in my mind is the moment when I realised that behind the literally thousands of religious statuettes I’ve seen, which never really interested me, sits an, often unnamed, artist. A real person, very different from the prototypical individual defining society at the time. If today it is difficult to succeed as an artist, imagine a world where almost everyone was a farmer or a soldier. And yet, somehow, for thousands of years, art has found a way to express itself. My predominantly practical view of the world could never before truly accept that art is a fundamental component of humanity. In this I’ve changed.

Third, I should mention the moment in the Frederic Mares museum when I realised that I’ve been spending the last hour looking at a collection of smoking pipes, second only to the sword collection. Although absolutely fascinating, the man was crazy. Besides being a compulsive hoarder, Mr. Mares also lived with the obsession to own stuff similar to the stuff he already hoarded. I admired gramophomes, photo cameras, bikes, guns, shaving knives, clocks, stamps, matchboxes, jewelry and many many other things. I could not help but laugh when I entered the key room. Literally a room with thousands of keys. All shapes and sizes. Even more amusing was the scissor collection. Why? Just why? I don’t think owning many things is healthy. One should buy experiences, not objects. And the moment when one becomes attached to the point of dependency to an object, that person has in effect crippled him or herself. Stripped of all possessions, would a person be the same, I wonder, or do our possessions come to define at least part of who we are? But who am I to talk. I can’t even throw away a pair of torn shoes.

I haven’t planned the next few days, my last in Barcelona. I might go to the amusement park on top of Tibidabo, the hill overlooking the city. I passed by the park on my way to the Sacre-Coeur church. Or I might go outside the city. Or I’ll just collapse on the beach and finally finish reading Cloud Atlas. Summer is still ongoing. 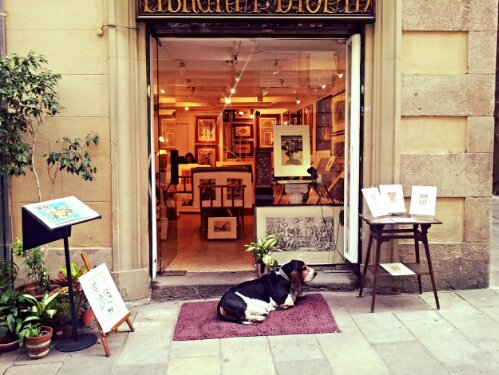 I too enjoy fine art.